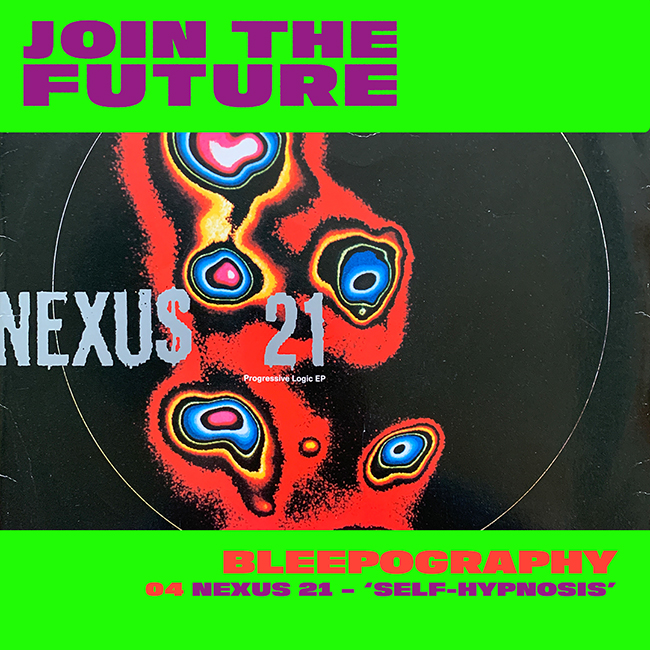 For today’s feature in the ongoing Bleepography series, Matt Anniss looks at the finest single track by Stafford’s Nexus 21, the duo that went on to greater commercial success as Altern8.

During the UK’s acid house revolution in the late 1980s, many seemingly unlikely towns became enclaves of creative activity. One such town was Stafford, where a group of former school friends raised on electro turned a small local studio into a dance music production line.

That studio was Blue Chip, a business owned by Northern Soul/Soul All-Dayer scene veteran Kev Roberts. In 1988, he offered an opportunity to two young wannabe producers, Chris Peat and Mark Archer, to come and work at the studio. Their small salary was paid for in part by a government grant similar to the YTS scheme.

Archer had originally appeared on to Roberts’ radar when he turned up at Blue Chip clutching a demo cassette of sample-heavy house tracks he’d made with a younger friend called Dean Meredith, and ‘a lad called Gareth’, as Rhythm Mode D. In an interview in 2018, Archer explained more:

‘Dean was the one who really wanted to get moving on stuff, but I don’t think any of us had an idea that this was going to take off – we just wanted to try and jam some stuff together. We wanted to do house and acid, so we took this demo cassette – which I’ve still got, and honestly, it’s terrible – to the studio and played it to Kev Roberts. I don’t know whether he saw pound signs, or thought he could mould us into what he wanted, but he signed us up there and then to his label, Blue Chip Records. We were like his in-house scratchers, and we had our finger on the house thing. He had a decent engineer, but he needed someone who knew what was coming up.. The first thing that we had out on Blue Chip was absolutely abysmal – nothing like what we wanted to do. It took us a good six months until he allowed us to do some acid stuff, which is the ‘Acid Trance’ album we put out on Blue Chip [in 1988].’

That album is something of a curio; while it was all made by Archer and Meredith with the assistance of Blue Chip’s in-house engineer and friend Andrew Meecham, it was presented as a compilation of tracks from different artists. It was the start of a collaborative process that would end up giving birth to some of the most influential and subsequently commercially successful British dance acts of the period, including Bizarre Inc (initially Meredith and Archer, but soon Meredith and Meecham) and Altern8 (Archer and Peat).

Archer admits that they were sonic magpies, as influenced by electro, hip-hop and breaks as Chicago house and Detroit techno. Their different aliases were utilised to showcase the different sides of their musical personas. The first Bizarre Inc album, ‘Technological’ (1989), was a wholehearted tribute to Motor City techno that notably sampled a swathe of early Detroit cuts. When Meredith took the project on alongside Meecham, Archer switched to making warm, melodic dancefloor cuts with Chris Peat as Nexus 21 and C&M Connection.

Following the success of their first single for Blue Chip as Nexus 21, ‘(Still) Life Keeps Moving’, the pair quickly recorded a debut album, ‘The Rhythm of Life’. Reissued in 2019, it remains one of the strongest early UK techno albums, in part because it doffs a cap to the best American dance music (not just Chicago house and Detroit techno, but also their beloved electro – ‘Techno City’ even sampled the Cybotron track of the same name) while also including nods towards developments happening elsewhere around the UK (see the subtle nods to Orbital’s ‘Chime’ on the funky ‘Music’, and the weighty sweatiness of ‘Bass Inclusion’).

One person to enjoy the Nexus 21 album was Neil Rushton, the co-founder of Kool Kat – the label that did more than any other to introduce Detroit techno to the UK – and the man behind Virgin Records’ pioneering ‘Techno! The New Sound of Detroit’ compilations. When Rushton decided to launch a new label which would champion UK sounds as well as American ones, Network Records, Nexus 21 became one of his first signings.

By this point in early 1990, Blue Chip had gone under. Rushton was therefore free to put out some of Archer and Peat’s C&M Connection material. The single ‘Another Night’ was one of Network’s earliest releases and included a ‘Techno Dreams’ remix that paid tribute to both their beloved Detroit techno and the sub-heavy Bleep & Bass sounds that had been emerging from Yorkshire since the autumn of 1988.

In our first interview for Join The Future: Bleep Techno & The Birth of British Bass Music, Archer explained: ‘It’s all about having the same ingredients but in different levels. Our first influence for the Nexus 21 tracks and that ‘Another Night’ remix, which was originally meant to be a Nexus 21 mix, was a big pile of Detroit records. We were also influenced by what was happening in Leeds and Sheffield, but the producers in those cities had slightly different inspirations. They had Detroit, their dub soundsystem backgrounds and electro and hip-hop as their influences.’

That ‘Techno Dreams’ remix resurfaced as the title track to another key early Network release, the compilation of “dance music with bleeps” that was Bio Rhythm. I’ll tell the tale of that particular collection on here at a later date (naturally, there’s plenty about it in the book if you can’t wait), but it was notable for containing another fine Archer/Peat production: Nexus 21’s ‘Self-Hypnosis’.

In its original form (see the embedded YouTube video above), ‘Self-Hypnosis’ is bass-heavy, but a little lacking in sub-bass weight. It is, though, superb: a life-affirming, rush-inducing fusion of blissful bleep melodies, the kind of warm organ chords regularly found on New Jersey deep house cuts, dreamy pads, metallic percussion hits (an industrial style feature not present on most of their tracks) and crispy TR-909 beats. It’s warm, artful and intoxicating – a UK classic every bit as good as the American records the pair were so keen to emulate.

When it came to releasing the first Nexus 21 EP on Network, Progressive Logic, Archer and Peat decided to open it with a reworked version of ‘Self-Hypnosis’ that owed far more to British Bleep & Bass. This was the ‘Mr Whippy Mix’ and it’s this version that I’ve included in the Join The Future: UK Bleep & Bass 1988-91 compilation. The version starts with a sub-bass drop – something of a bold statement, and certainly not something you hear all that often – then builds slowly on a solid foundation of crunchy TR-909 drums and deep bass before eventually introducing the bleeping lead line a minute and 15 seconds in.

Other elements from the original – most obviously the organ stabs and a dark string motif – periodically appear throughout, but the track’s inherent warmth specifically comes from the bassline. It’s sparse and stripped back, too, making it a genuine Bleep & Bass track, even if it still owes a debt to Motor City futurism. Suffice to say, the Rob Gordon re-master that appears on thecompilation is seriously heavy; never has a UK classic sounded so good.

In truth, Nexus 21 were never a Bleep act, but the few Bleep-influenced tracks and remixes they produced before morphing into Altern8 (who, it should be noted, did still sample Bleep cuts as part of their productions) remain timeless and alluring three decades on. There are few British techno acts from the period you can say that about.