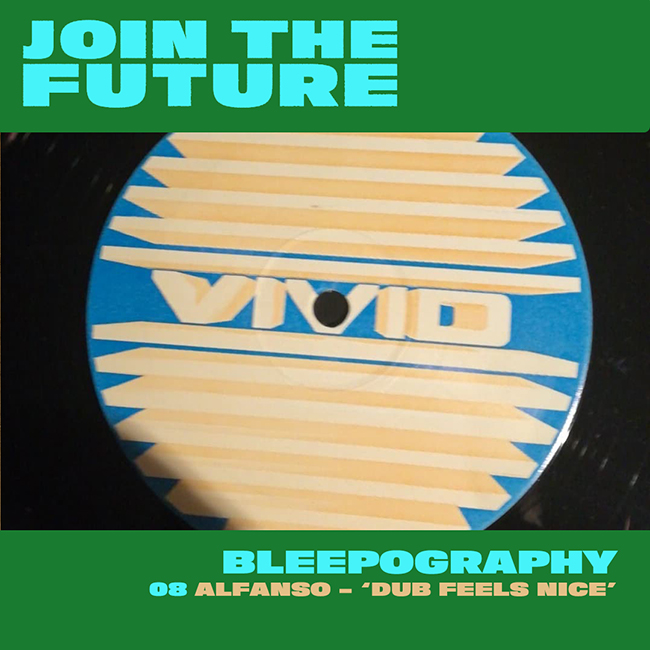 In the latest instalment of our ongoing Bleepography series, Matt Anniss discusses Alfanso’s exceedingly rare ‘Dub Feels Nice’, one of the bleep-era’s most mysterious tracks

When I started researching Join The Future: Bleep Techno and the Birth of British Bass Music six years ago, one of the most alluring aspects of Bleep & Bass as a style was how mysterious it was. That was mainly because little was known about those who made it, bar a few successful and high profile artists with long careers such as LFO, Cabaret Voltaire and Nightmares On Wax, and the clubs, backstreet “blues” and forgotten local DJs who helped forge the sound had been all but ignored.

While the sound is still a little overlooked in my opinion, the publication of the book has at least solved a few of the mysteries about the people and places that cooked-up the sound. By and large, the records that they made are not rare or particularly hard to find, with one or two exceptions. Bleep & Bass emerged at a time when record sales were booming, and the most popular club cuts could sell in excess of tens of thousands of copies.

There are still some insanely rare and largely unknown Bleep-era cuts. Perhaps the rarest of all – besides dubplates of unreleased remixes and tracks cut by the likes of Rob Gordon and Mark Iration (then Mark Ital) – is Alfanso’s ‘Dub Feels Nice’, a track shrouded in mystery of which only a handful of copies definitely exist. Quite how many is hard to say, but I’ll come on to that a little later.

I first heard it Winston Hazel playing it a few years ago on one of his very occasional trips to DJ in Bristol. What struck me about it was how sub-heavy it was, how deliciously sweaty and up-tempo the beats were, and how addictive the repeating vocal sample was. The next day I found myself singing “music makes you feel ni-ice” while wandering around the supermarket. Within a few days I’d forgotten about it though. I’d not bothered to ask Winston was what it was called or how he got hold of it.

It would be fair to say that it had been one of Winston’s secret weapons for a long time. When he played it at the 2018 Boiler Room session in Sheffield that forms the backdrop of the introduction to “Join The Future”, some of the veteran local ravers I was talking to mentioned that it had long been a big tune in the Steel City. Further digging confirmed this to be the case, with a couple of other DJs – Richard Hardcastle AKA Solid State, who provided the label artwork image, and Winston Hazel’s partner in crime at Kabal, Pipes – telling me that they had copies and that it had been a secret weapon for them, too.

So what was the story behind this secret Sheffield anthem? I was told that it was a Rob Gordon production, so I gave him a call to find out. It turns out he’d produced it for a then young artist called Alfanso Williams, someone he says he has not seen for 25 years (for the record, I’ve tried to track Williams down but have so far drawn a blank).

The pair made it together in late 1990 or early ’91, with Gordon delivering a range of mixes: an extended A-side club workout, and two B-side, reggae-style ‘versions’ that are effectively dancefloor dubs with a little more emphasis on the bass and the weirder electronic noises they’d included in the main mix.

At that time Gordon had just started a label called Void, though evidence of other releases is a little hard to find. The catalogue number of ‘Dub Feels Nice’ suggests it was the third label release, though I’ve struggled to find any evidence online that others existed. What Rob Gordon did confirm is that he pressed up 500 copies, with a box or two making it to Sheffield before the distributor went bankrupt. The rest of the records never made it to Gordon and appear not to have reached stores either, which would account for the very low number of copies known to exist. If Bleep has a “holy grail” record, it may be this one.

When it came to working on the Join The Future compilation, I decided I’d try and license it to give the track a proper first release – or at least one of the mixes of it. Happily, Rob Gordon was keen to see it come out and a deal was quickly sorted. Late in the day Gordon told me he’d found a fourth ‘Version’ mix that he’d forgotten about buried on the original DAT tape. In the end, we decided to put this on the compilation, meaning those that do own copies of the impossible-to-find 12” still have an exclusive.

‘Dub Feels Nice’ is not a Bleep & Bass track in the purest sense of the term, but it certainly comes from the same sonic space. Rhythmically, it sits somewhere between steppers reggae and dancehall, while Gordon’s gargantuan bassline is among the deepest, richest and weightiest in his catalogue. The soulful vocal snippet that appears throughout is a killer hook (once heard, it will lodge itself in your consciousness), while the weird, off-kilter electronic noises that rise and fall throughout are druggy and intoxicating.

It’s a terrific record, and one that I’m delighted people can finally get their hands on. For the record, ‘Version 4’ is a little stranger and wilder than the mix that appears on the A-side of the scarce 12”, though the crazy percussive intensity towards the end is a feature of every mix I’ve heard.