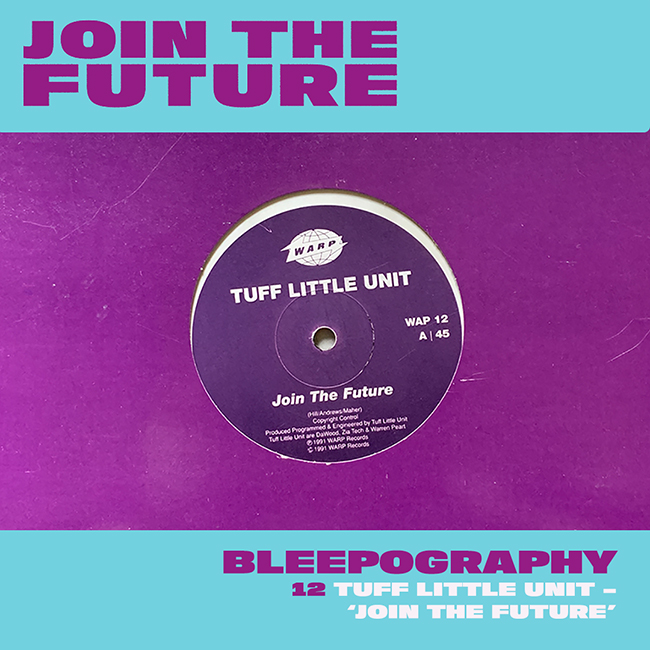 Today’s Bleepography entry is all about Steel City duo Tuff Little Unit and their most famous creation, the rush-inducing brilliance that is ‘Join The Future’.

By now you’ve probably worked out that I’m a big fan of Tuff Little Unit’s ‘Join The Future’ – after all, I did borrow the track’s title for both my book and compilation. That was partly a tribute to the record, which to my mind is one of the most artful and inspiring of all Bleep & Bass releases, but also recognition that its title seemed to sum up an entire musical, social and cultural movement. Look forwards, not backwards: our time has come.

When it was released in January 1991, ‘Join The Future’ effectively marked the end of Warp Records association with the style, and in truth it was probably one of the last great Bleep & Bass records to appear in stores. If it was indeed the full-stop to a musical movement, as I believe, I can’t think of many better last-hurrahs.

It was quite late into the research and writing process of Join The Future: Bleep Techno and the Birth of British Bass Music that I first spoke to the people behind the record, Glyn Andrews and Zye Hill. Since then, I’ve got to know both – and particularly Glyn – a lot more, meeting up with them (pre-lockdown, of course) on my semi-regular trips to Sheffield. They’re both great people and remain virtually unknown, despite the widespread love for their greatest musical moment. Neither has been actively involved in music for some time, though since our first phone interview a year or go they’ve made moves to rework some of their old demos and potentially perform live at some point down the line.

Those who’ve read the book know the outline of their story. Glyn was a school friend of Rob Gordon and Sean Maher – they were in the same year at Hurlfield, a comprehensive whose intake included many teenagers from Sheffield’s notorious Park Hill and Hyde Park estates – while Zye had been at the same secondary school some years earlier (possibly in the year, or the year below, another Bleep & Bass pioneer, Winston Hazel). Glyn and Zye got to know each other through the Sheffield reggae scene in the early-to-mid 1980s, as both were in local bands.

As the 1980s progressed, both got music-related jobs working for Sheffield City Council, too: Glyn worked part time for the Youth Service running music drop-in sessions, while Zye was one of the in-house engineers at Darnall Music Factory, a council-owned community studio and rehearsal space located in one of the Steel City’s most run-down, post-industrial neighbourhoods.

They began making music together after working as session musicians for their friend Rob Gordon at FON. They both played some part in the making of tracks for Ruth Joy’s debut album on MCA. By this point they’d separately become house and techno fans, not just of the bass-heavy tunes that formed the backbone of the emerging Bleep & Bass sound, but also the music of Chicago and Detroit.

The two worked together primarily at home and after-hours at Darnall Music Factory. ‘Join The Future’ was made mostly at the latter. During one of the sessions for the record, Sean Maher swung by and started messing around on one of the synths; one of his motifs ended up in the finished track. Sean therefore gets a writing credit, though he was never officially a part of Tuff Little Unit.

The track went through numerous changes before it was completed, the biggest being the addition of a vocal from Warren Peart, a Sheffield-based singer who grew up down south. When Tuff Little Unit signed to Warp, it was in part because two of the label’s co-founders, Rob Mitchell and Steve Beckett, saw the commercial potential of “Bleep with vocals”.

From the start, Tuff Little Unit’s relationship with Warp was tense. They signed to the label around the same time as their friend Rob Gordon was being acrimoniously ejected from Warp’s board following a series of bitter and vociferous arguments with his fellow co-founders. Mitchell and Beckett then irritated Zye and Glyn further by asking Rob Gordon to re-edit ‘Join The Future’ for release. It was Gordon’s edited version (see YouTube video above), which brought the bass drop forwards and dispensed with some of the pair’s carefully crafted build-up, which ended up being released.

Whatever the extent of his edits (or otherwise), the mix that came out in January 1991 was still superb: a far-sighted fusion of loved-up early morning deep house beauty and weighty Bleep & Bass sleaze that remains as alluring today as it did when it was released.

Last summer, Glyn invited me to join him and Zye at his house for a Friday night listening session. When I arrived, I was pleasantly surprised to see Sean Maher there, too. I’d met and interviewed Sean a couple of years earlier, so it was nice to catch up with him. After handing me a beer, Glyn pointed out the DAT machine they’d set up, rummaged through a big box of tapes and selected a handful to play me.

The first track he played was their original, vocal-free mix of ‘Join The Future’. While it was a little odd not hearing the recurring vocal phrases featured on the Warp-released mix – something I’d sung or whispered along to many times in clubs over the years – the track still sounded incredible. Their arrangement was subtly different to Gordon’s uncredited re-edit, teasing in the most impactful moments (especially the insanely deep, sub-heavy bass drop) a little more. It was a little longer than the version that came out on Warp, too, though not by much. It didn’t take long to decide that this was the version I wanted to put on the compilation.

That night Glyn and Zye played me six or seven other tunes from their box of archive DATs, the majority of which set my pulse racing. Interestingly, there was little quite as obviously related to Bleep & Bass as ‘Join The Future’, but all of it seemed far-sighted, off-kilter and different to almost anything released at the time. Some of the cuts were closer in tone the bizarre-but-brilliant (and properly bass-heavy) B-side of ‘Join The Future’, ‘Master Plan’ (see below), or the eccentric, rave-goes-electronica flipside to their second single ‘Inspiration’, which was called ‘Rush To The Beat’. Others seemed to draw influence from ragga and dancehall, or were restless, sub-heavy electronica workouts that would have fit on Warp during the label’s ‘Artificial Intelligence’ period from 1992 onwards.

By that point, Tuff Little Unit had been dropped by Warp. Against Zye and Glyn’s wishes, Warp had sent them down to London to work with Jazzy M, a DJ/producer they both admired and remain friends with. They say they worked better on their own in Sheffield and resented the label spending money on studio fees. They also disagreed with Warp’s insistence that they make more music with vocals (some of the unreleased demos are of songs, featuring Peart delivering his own lyrics), and resented the way in which they were being portrayed as a potential crossover act. In truth, they just wanted to make far-sighted underground music.

Warp had high hopes for Tuff Little Unit’s second single, ‘Inspiration’. Seemingly an attempt to fuse their style with the breakbeat hardcore sound that was becoming increasingly popular nationwide, the song was the result of their London studio sessions and has not aged all that well. While I have more time for ‘Inspiration’ than Glyn and Zye, who say they have always hated it, I agree that it is a mediocre follow-up to a track as good as ‘Join The Future’. The loved-up call for unity and ‘Inspiration’ contained within the lyrics is probably the best thing about it, capturing the ‘we can change the world’ ethos of the rave era.

Regardless of whether or not that single is a stain on their catalogue (as they believe), Tuff Little Unit will always be remembered for ‘Join The Future’. It was far more successful than ‘Inspiration’, leading to a number of live appearances (including some supporting the Shamen, fact fans). ‘Join The Future’ became popular far further afield than the North of England, receiving plenty of plays in San Francisco, Chicago and New York. I’ve lost count of the number of people who’ve told me it is one of their favourite “E records”, or that it was an anthem at a particular club or other. Naturally it was also huge in Sheffield, becoming an anthem at the city’s leading after-hours ‘blues’, CJ’s.

Given the troubled times we’re living in, the record’s far-sighted desire to look forwards with a simple, loved-up message of hope is fittingly alluring. I’ll finish by repeating those words: come and join the future.