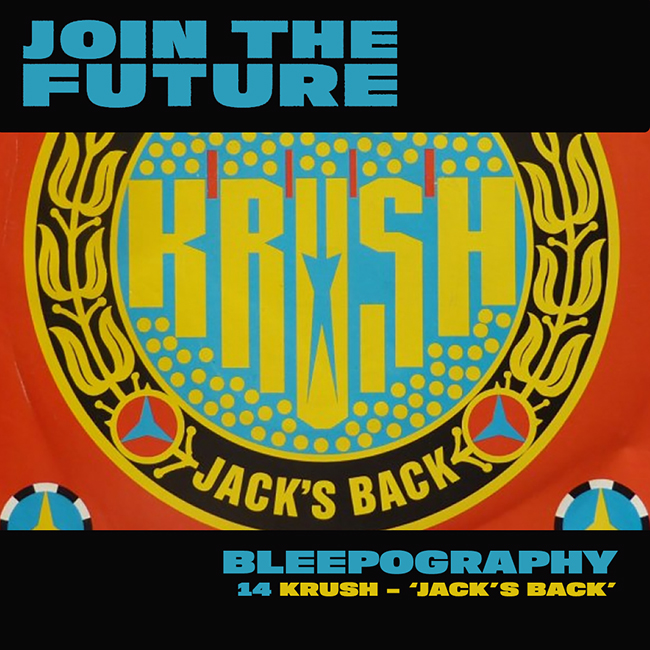 In today’s Bleepography entry, Matt Anniss tries to answer a question posed to him by a number of readers: was Krush’s ‘Jack’s Back’ the first ‘proto-Bleep’ tune?

Last week I received a Facebook message from Rob Gordon, the producer and remixer who did more than almost any other to help shape and define the Bleep & Bass sound. It included a link to Krush’s ‘Jack’s Back’, the B-side to the Nottingham outfit’s colossal 1987 hit single ‘House Arrest (The Beat Is The Law)’, and the following question: ‘Was this the first use of bleeps?’

It’s not a new theory – a few people have raised it with me before – and one that I gave significant thought to during the time I was researching, and writing Join The Future: Bleep Techno and the Birth of British Bass Music. I’m not sure I agree that the track was a genuine sonic step towards the Bleep & Bass sound that emerged a year or two later, but Krush certainly played a significant role in the pre-history of Bleep.

Krush’s Mark Gamble and Cass-Rock (real name Cassius Campbell) were certainly amongst the first wave of British bedroom musicians to dedicate themselves to house music. Born and raised in Nottingham, the producer (Gamble) and DJ (Campbell) combination had graduated from the East Midlands’ vibrant electro, hip-hop and house scene. Alongside another friend, Delroy St Joseph, Gamble was also responsible for one of the earliest underground UK house cuts, T-Cut-F’s ‘House Reaction’.

Recorded and released a few months before work on Krush’s debut single began, the track drew great influence from New York productions of the period as well as Chicago ones, sitting somewhere between the proto-house records of the early-to-mid 1980s (seen at the time as a logical extension of electro) and the TRAX/DJ International sound.

‘House Reaction’ included a number of stylistic ticks reminiscent of those NYC ‘proto’ productions – delay-laden drum machine sounds, a Paul Simpson-inspired bassline and so on – as well as riffs reminiscent of Nitro Deluxe’s 1986 anthem ‘Let’s Get Brutal’ and stabbing, twisted vocal samples that were such a feature of dance music in the 1980s.

‘House Reaction’ was released by Kool Kat, the Birmingham-based  label run by future Network Records co-founder Neil Rushton. As many will know, Rushton went on to forge a formidable working relationship with Detroit techno pioneers Derrick May, Kevin Saunderson and Juan Atkins. When he brought May over to the UK for the first time, he not only got him to remix ‘House Reaction’ but also put him in a studio with Gamble.

Around the same time, the FON studio in Sheffield was struggling. It was founded a couple of years earlier by the members of industrial funk band Chakk with the advance they received from MCA Records for their debut album ’10 Days In An Elevator’. MCA cut Chakk adrift in 1986 after the album sold poorly, leaving the band with the most up-to-date recording studio in the region but nowhere near enough paying clients.

A plan was hatched to offer spare studio time to local bands and club DJs who fancied making a record, with the studio’s in-house production team, Mark Brydon and Rob Gordon, on hand to help turn their ideas into finished tracks. It was not the first time this idea had been tried in Sheffield, as Chakk themselves had received a similar offer from Cabaret Voltaire, who often allowed local bands they liked to use Western Works (with or without Richard H Kirk or Stephen Mallinder handling mixing desk duties). Chakk’s brilliant debut single, ‘Out of the Flesh’, was subsequently recorded at Western Works.

Amongst the first to be offered studio time at FON were Gamble and Campbell, who headed up the M1 from Nottingham several times a week to work on tracks. The resident DJs at popular local club night Jive Turkey, Parrot and Winston Hazel, were also given a chance to work on music at FON. While Hazel ended up skipping the sessions, Parrot (real name Richard Barratt) joined forces with Carl Munson and Julie Stewart as Funky Worm, later releasing sample-heavy crossover house hit ‘Hustle (To The Music)’.

By the time that was released in 1988, FON Records, the label launched by the studio to put out material recorded in the studio by local and regional acts, was big news. That of course was down to the surprise success of Krush’s first single, ‘House Arrest (The Beat Is The Law)’. The single was developed over a number of weeks, with Campbell and Gamble making regular trips up the M1 to work with Gordon, Brydon and Gordon’s girlfriend, vocalist Ruth Joy.

‘House Arrest’ sounds a little dated these days – it was after all a combination of samples, scratches, Chicago-inspired beats, colourful synths and contemporary studio tricks that came from a similar head-space to other big UK crossover pop-house hits of the period (think S’Express’s ‘Theme From S’Express’, MARRS’ ‘Pump Up The Volume’, Coldcut’s ‘Doctorin’ The House’, and Bomb The Bass) – but it’s actually aged better than some records of the period. The jacking drums and the funky acid bassline are addictive, while the production holds up well given its age (something not all that surprising given Rob Gordon’s involvement and the quality of equipment being used).

Whatever we think of it now, ‘House Arrest’ was a big deal at the time, in part because there were relatively few house-inspired records being made in the UK, the style was becoming increasingly popular across the nation, and most importantly of all the track had enough hooks and dancefloor chops to work on the radio and in the clubs.

It was of course in the clubs where it first made an impression, so much so that Mercury Records’ dance division snapped it up for a wider commercial release. In the end the record spent no less than 17 weeks in the UK singles chart, peaking at number three. When I interviewed Mark Gamble a few years ago, he confirmed that the record went on to sell in excess of a million copies around the World.

Gamble also told me that he is far prouder of B-side ‘Jack’s Back’ than he is of ‘House Arrest’, primarily because he, Campbell, Gordon and Brydon managed to deliver something that was far more ‘underground’ in tone and sound than the pop-dance A-side. ‘Jack’s Back’ is certainly an alluring mixture of jacking, Chicago style beats, deep house chords, loved-up musical intent and, yes, melodic lead lines that are effectively bleeps – 18 months before Unique 3’s debut single hit stores. For this reason, it has stood the test of time far better than ‘House Arrest’ and many other UK-made house records of the period.

But is it Bleep, or even proto-bleep? I’d say not. For starters, there’s little or no influence from reggae soundsystem culture, and the bassline is funky rather than weighty (there’s little sub-bass heaviness going on). It’s also far dreamier and warmer than the vast majority of later Bleep & Bass cuts.

What makes ‘Jack’s Back’ and ‘House Arrest’ important is the role they played in setting in motion a chain of events that would later lead to some important Bleep & Bass records. The money Gamble and Campbell earned from the single’s success may not have been quite as much as they were probably due (though that’s another story) but it was enough to allow them to continue making music and not get ‘proper jobs.’ Gamble later used this freedom to make his first track as Rhythmatic (this time with another Nottingham producer, Leroy Crawford), the Unique 3 inspired ‘Take Me Back’ – an early Network Records Bleep & Bass cut that I’ll be covering later in this series.

The impact of the success of ‘House Arrest’ was even more marked on the FON studio and their in-house production team. Together, Brydon and Gordon began working as ‘FON Force’ and ended up securing jobs working on high-profile albums for artists including Pop Will Eat Itself, The Fall and Yazz. This meant the pair were making good money – enough for both to buy houses and, in Gordon’s case, later buy a home studio set-up of his own. It was this set-up that he used to create Forgemasters’ ‘Track With No Name’, the first single on the Warp Records label he co-founded with the owners of the FON record shop (which, for the avoidance of doubt, shared a name with the studio and label but by then was separately owned).

‘Jack’s Back’ may not be Bleep (or even ‘proto-Bleep’), but it certainly played a small but significant part in the complex and multi-layered story that led to the sound’s emergence in 1988. For that reason alone, it deserves a place in our Bleepography.