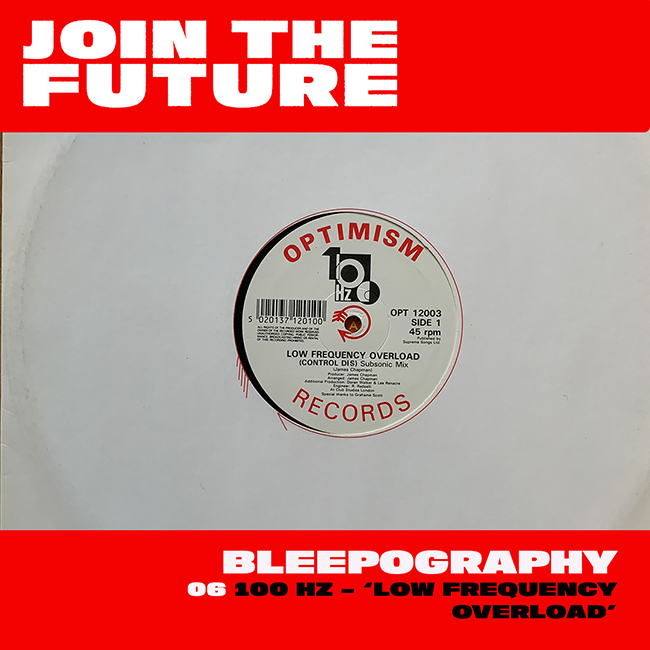 The latest edition of the Bleepography series sees Matt Anniss telling the tale of Londoners 100 Hz and their speedy response to Yorkshire Bleep, ‘Low Frequency Overload’…

At the tail end of the 1980s, the UK was a divided country. The fault lines were varied: rich against poor; old against young; Conservative voters versus those against the rest; and, as had been the case for some time, north v south. This antipathy between people based in different parts of the country was nothing new of course, but it seemed particularly acute in this period, not just politically (as has been discussed many times over the years) but also culturally.

(Speaking of which, Mark Archer once told me that at an early Nexus 21 gig in London they were boo’d at and called ‘Northern monkeys’, despite being from the Midlands… but that’s a story for another day)

There was far more marked regionalisation within Britain’s dance music scene in the late 1980s and early ‘90s than there was today, with each significant city (and the satellite towns around it) offering a slightly different blend of prominent influences and interests. This can be seen in the way that Manchester’s acid house-era scene was far more loved-up and baggy in comparison to the harder, deeper and more industrial-fired sounds preferred over the Pennines in Sheffield. Nottingham meanwhile sat somewhere between the two, with a stronger hip-hop and electro flavour than, say, Sheffield.

What united these places, aside from the links to Jamaican soundsystem culture that ran deep within Britain’s post-industrial towns and cities, was a love for house music that preceded the boom that swept up the whole of the UK between 1987 and ’89. London was slower to fall in love with house and techno music – despite the efforts of important DJs such as Jazzy M, ‘Evil’ Eddie Richards, Colin Faver and Lawrence ‘Kid’ Batchelor, to name just four – but boasted a larger and more vibrant dance music scene than anywhere else in the UK. Its’ particular regional flavour was rooted in a combination of jazz-funk, rare groove, reggae, soul and, from the autumn of 1987, the Ibiza-influenced “Balearic beats” sound.

The strength of hip-hop, rare groove, reggae and soul within London meant that when house and techno records began to get made in greater volume there, the resultant records tended to reach for breakbeats more often than the syncopated, four-to-the-floor rhythms associated with dance records made in Detroit or Chicago. This was in sharp contrast to what was happening in the Midlands and Yorkshire in particular, where the industrial-strength Bleep & Bass sound – all mighty, dub style sub-bass, punchy Roland TR-909 and TR-808 drums, and sparse electronic melodies – was sweeping all before it.

Of course, London and the South East did “get” Bleep – the finest records proved inspirational all over the UK and beyond – but it took a little while for that influence to make its way into records. By the time that happened, from the spring of 1990 onwards, there had already been a number of pioneering breakbeat hardcore records emerge from London. Thus, the resulting sub-bass and Bleep-heavy records tended to fuse elements and hardcore and Yorkshire bleep, creating what I describe in Join The Future: Bleep Techno and the Birth of British Bass Music as “Bleep & Breaks”.

There were of course outliers and records that bucked this trend. One of these was the debut single from South East London act 100 Hz, ‘Low Frequency Overload’. The first white labels began appearing around November 1989, but it had been made a few months earlier when only a handful of big Bleep tunes had been produced and released (Unique 3’s ‘The Theme’, Nightmares on Wax’s ‘Dextrous’ and Forgemasters’ ‘Track With No Name’ being the most successful).

100 Hz was the brainchild of a young DJ called James Chapman and his friends Lee Renacre and Dorian Walker. As Renacre told me in an interview last year, by the summer of 1989 they were all committed ravers:

‘I was very young when I first went to one of the [M25] Biology raves – probably 15 or 16. We used to meet in Catford, get in the back of a van, and just drive all night to find somewhere. Sometimes we’d go to Camber Sands [near Rye] and there would be little illegal beach parties. We’d also go to Sterns in Worthing and to midweek London clubs like Sound Shaft and Legends.’

With such dedication to the cause and passion for dance music, it isn’t that surprising that Chapman and Renacre, in particular, decided that they wanted to make music. Initially it was Chapman who was the driving force, and it was he who invited Renacre to come and do regular jam sessions using the small number of second-hand synthesizers and drum machines he’d bought.

It was Chapman, too, who decided to take it further and book a day in a studio – Vons on the Holloway Road in Islington to be precise. This was fairly standard practice at the time, given that relatively few wannabe music-makers had access to a home computer or a cracked copy of early production software such as Cubase or Creator/Notator; studios did, as well as an engineer who could program it and work a sampler. With access to an engineer and the right equipment, you could quite easily create a killer dancefloor cut in a day.

Chapman invited Renacre to join him in the studio, along with Dorian Walker, and together they headed across the city to see what they could come up with.

Renacre explained: ‘It was James’ idea – initially I just went along for the ride. I got into it though and had a fair bit of input into the first couple of tracks we made. We played around on the keyboards and the engineer then translated that. He helped us with the arrangement too. After that I was hooked.’

They were happy with the first track they completed, ‘Low Frequency Overload’, which was mixed down into two different versions – the most significant of which was the ‘Subsonic Mix’ (this eventually became the A-side of the 12” release). The track remains alluring, in part because its’ quirky blend of disparate dance music elements makes it fairly unique amongst early Bleep-related cuts.

There are tons of cheeky spoken word samples (including a countdown intro taken from a stereo demonstration record and voices saying both “low frequency overload” and “one hundred hertz”), some well-placed bleeps, bursts of sweaty hip-hop breaks, a meaty, deep, sub-heavy bassline and plenty of loved-up melodic intent. Crucially, there were also colourful chords and melodies that recall the glassy-eyed bliss of Italian deep house, which was then rising in popularity thanks to the success of Sueno Latino’s ‘Sueno Latino’ and the DFC Records-promoted ambient house/dream house sound.

‘Low Frequency Overload’ is not a techno record, but rather a house record with extremely strong bleep techno influences. Renacre confirmed in our interview that they were keen to have ‘the heaviest bass possible’ in keeping with the ‘bass war’ that was beginning to break out within British dance music. They achieved this, with a little help from Vons’ engineer, and therefore created one of the most bass-heavy house or techno tracks to have come out of London by that point in time.

The bleep influences came specifically from the Warp Records releases they’d heard – Forgemasters, Nightmares on Wax, Sweet Exorcist etc – and it was that label they dreamed of releasing on. They sent Warp a demo cassette of ‘Low Frequency Overload’ but never heard anything back; when the Steel City stable released LFO’s ‘LFO’ six months later, Chapman and Renacre thought they’d bitten their style (in fact, ‘LFO’ was made in the autumn of 1989, before the 100 Hz track had been released, so it’s just a coincidence).

With no label willing to take a punt on ‘Low Frequency Overload’, Chapman and Renacre took matters into their own hands and pressed some white labels that were then lugged around record stores in London. The record quickly became popular amongst DJs and was snapped up for a commercial release by Optimism Records in the spring of 1990.

Chapman and Renacre continued to work together as 100 Hz for some time, releasing a number of other bass-heavy cuts, some of which were far more influenced by techno than house. I still have a soft spot for their debut though, which is why you’ll find it – in ‘remastered by Rob Gordon’ form – on the digital version of Join The Future: UK Bleep & Bass 1988-91. Incidentally, if you want to find out more about Renacre’s work since then, I interviewed him for IDJ magazine last year.