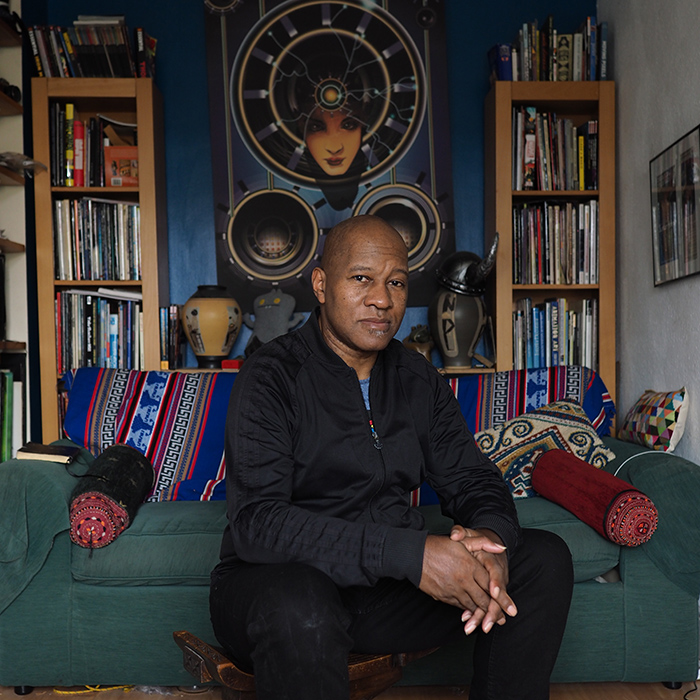 Although his illustrations adorned a large number of fliers and record covers in the rave era – particularly releases and events related to hardcore, darkcore and early jungle – Junior Tomlin is still not as celebrated as some of his peers.

In recent times his particular brand of artistic futurism has finally started to be appreciated by a wider audience, though the Londoner remains less well-known than, say, Trevor Jackson, whose graphic design contributed much to the look of British dance music releases in the late ‘80s and early ‘90s, or the Designers Republic’s Ian Anderson (responsible for the look of Warp Records and countless other iconic sleeve designs in the early 1990s).

Thankfully Tomlin is now being thrust centre stage courtesy of Join The Future publisher Velocity Press, which has just published a hardback, coffee table-friendly book that gathers together some of the illustrator’s favourite work. It’s a bit of a departure for a publisher whose previous books were forensic, narrative non-fiction explorations of the roots of British bass music, but a move that makes perfect sense.

Tomlin’s vivid, colourful, sci-fi inspired illustrations and layouts appeared on flyers for some of the most important raves and club nights of the period – think Dreamscape, Raindance and Raveworld for starters – as well as covers for records by the likes of Renegade Soundwave, The Scientist, Depth Charge, Shades of Rhythm and Xpansions. Oh, and countless key hardcore and jungle compilations released during a time when both sounds were just becoming established.

Tomlin’s visual aesthetic was Afro-Futurism with an airbrush, though his imaginative illustrated visions seemed to draw more from dystopian graphic novels, famous comics (Tomlin also worked as a colourist for Marvel, DC, 2000AD and others), and bleak sci-fi movies than the style’s long artistic history. The loved-up, ecstasy-fuelled desire for unity prevalent within the culture promoted by some of his clients was also an inspiration, too, as the series of fliers and posters for Peace Fest events featured in the book prove.

Many of these images featured male or female faces which were half black, half white. Given recent events, and the just and proper rise of anti-racism protests worldwide, these images are a timely reminder of the inclusivity and equality sought by pilled-up ravers (even if those selling them the dream – and making money off it – were predominantly white and sometimes privileged).

Junior Tomlin: Flyer & Cover Art is a vital retrospective right now, and not least because Tomlin was a rare example of an in-demand illustrator and designer from the black British community whose work helped define the visual identity of styles of music whose origins were undeniably black. His style was also unlike anyone else, despite his varied inspirations.

These inspirations are explored more in the first portion of the book, first via a foreword from acid house and rave culture archivist Chelsea-Louise Berlin, and then in Tomlin’s own introduction. There’s also a sizeable interview with the man himself by Marcus Barnes, which delves even deeper into Tomlin’s history and extensive career. (Incidentally, Velocity Press founder Colin Steven hosted an ‘in conversation’ session with Tomlin on Facebook Live last week, which you can view here and provides further detail on his background, artistic ethos and inspirations).

The heart of the book is of course Tomlin’s eye-catching illustrations. These are divided into two sections. The first showcases some of his work on sleeve artwork for labels such as Mute, Kickin’, Slammin’ Vinyl, React, Vinyl Solution and ZTT, while the second focuses on Tomlin’s poster and flier designs. Throughout, each image is accompanied by notes from Tomlin telling the stories behind them.

It all adds up to a superb celebration of an artist whose work will forever be associated with rave culture in the UK. Whether you’re simply a misty-eyed raver or a graphic design enthusiast, we’d recommend grabbing a copy now from the Velocity Press website.

Junior Tomlin: Flyer & Cover Art is out now on Velocity Press. For more information on Junior Tomlin’s work, check out his website.